BLESSED BE THE TIES THAT BIND?

An old hymn starts out, “Blessed be the ties that bind, Our hearts in Christian love, …” This is valid where the ties are in fact “Godly” because they produce a Godly legacy and outcome. Many people are unaware of unnatural and ungodly ties, and of their negative legacies and outcomes. These negative bonds and resulting bondage are the subject of this brochure. 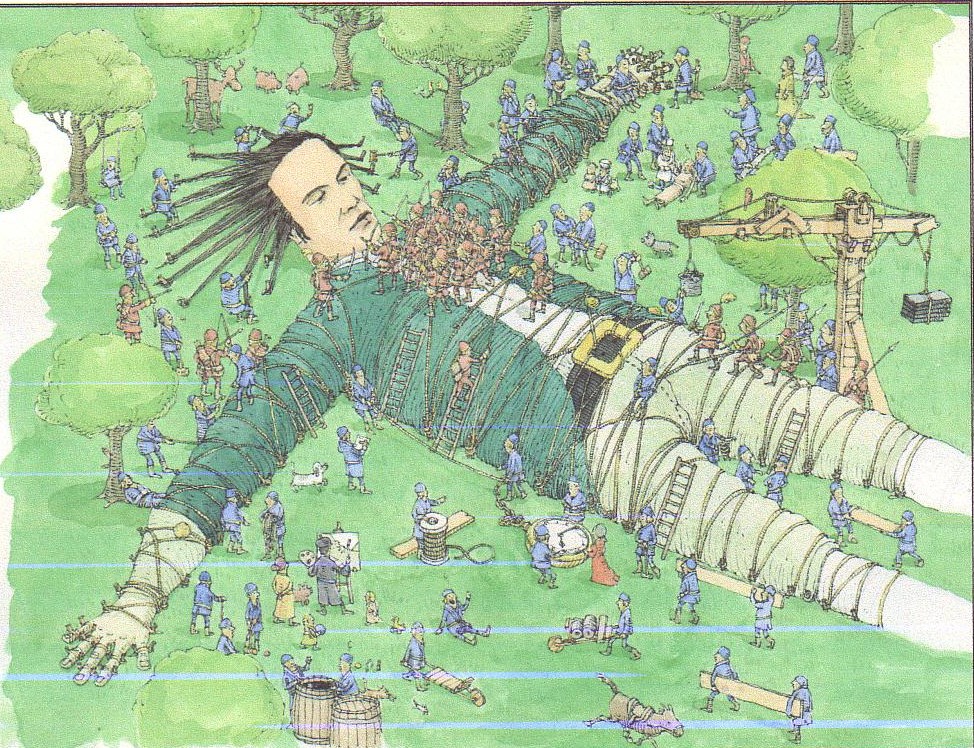 In the entertaining story of "Gulliver's Travels" illustrated at left, when Gulliver was washed up on the shore from a shipwreck in the land of Lilliput, he awoke to find himself tied down by a myriad of ropes by the diminutive people.

In real life many people can be unaware that they can be bound by and tied to others through invisible unhealthy and ungodly Soul Ties and Trauma Bonds.

WHAT ARE SOUL TIES?

Soul ties occur when people are enmeshed, engaged or attached through shared emotional or intimate experiences. Some are Godly, natural and appropriate, while others are not, occurring through violation of spiritual, emotional and/or personal boundaries.

Healthy ties occur when parents and family nurture a child to maturity to achieve wholeness and realize their full potential. A husband marries a wife and through consummation of the marriage they become one flesh.  Unhealthy ties occur where violations impede that process resulting in co-dependency and dysfunction.

Where a sexual perpetrator forces his/her victim under duress to never disclose under threat of retaliation, this vow needs to be renounced. A sample prayer follows. 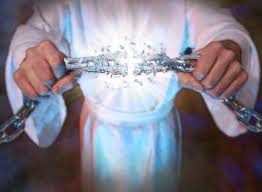 Yeshua (Jesus) is the breaker of Soul Ties and Trauma Bonds

VOWS OF SECRECY AND SILENCE:

Heavenly Father in Jesus name, I pray at an executive level, and I renounce and repudiate all vows of secrecy and silence, every threat that has been made against me, that if I ever disclose anything that had ever been done to me, that I would be hurt or punished, or those close to me would be hurt or punished.  I choose to release these vows to you, together with any vows that I have undertaken to repress all family secrets.  I choose to bring into your light all the hidden things of darkness, and so release myself from all these vows.

There are several varieties of unnatural and ungodly Soul ties that need to be confessed and renounced.

The first is in relation to people who have been previously married and divorced.  The marriage is normally carried out in a religious or spiritual framework, while divorce is usually done at secular level.  While it is outside the province of any man or minister to annul that covenant, it is important to lead the person to invite God to give them a “Bill of Divorcement” from their former marriage partner/s.

Blood covenants that have been cut whether between children or adults, through cutting, pricking and mixing bloods need to be renounced and repented of before the Lord asking His forgiveness and release.  There are only two true blood covenants allowed (1) between the Lord Jesus and ourselves and (2) between husband and wife when the hymen is broken.

Note also, that where there is ingestion of male semen, a blood covenant has been established between couples, because blood is in the semen.

WHAT ARE TRAUMA BONDS?

While there can be natural and godly soul ties between children, their parents and extended family members, there can also be unnatural and ungodly soul ties that need to be severed and broken.  This is particularly relevant where there has been a dominant and controlling parent, relative, significant other, abusive teacher or authority figure, etc.  Where the child or person has witnessed or been subject to violence, bullying, intimidation, trauma, betrayal, etc, ungodly soul ties or trauma bonds can be established which also need to be severed.

Examples of two sample prayers are as follows:

1. Heavenly Father in Jesus name, I renounce at an executive level all unnatural and ungodly Soul ties between myself and my mother, and my mother and myself; myself and my father and my father and myself: myself and my siblings, all aunts and uncles, or extended family members; or teachers and authority figures that traumatised me.  I want only that which is of your natural and godly order to remain, and ask that You will remove all those ties and bonds that are outside your Godly order, in Jesus Name, amen.

2. Heavenly Father in Jesus name, I ask that you would break off and remove all unnatural and ungodly sexual bonds, between myself and Mary and Mary and myself; myself and Josie and Josie and myself; and my cousin Jess and Jess and myself.  I ask that you would cut off and remove with the double-edged sword of your Holy Spirit, anything bonds them to me or me to them in Jesus name, amen.

People can be bound to others through bitter root judgments  vows such as “I will never forgive … for what they did to me or those close to me!” or unwillingness to forgive for fear of being hurt again. It also prevents God from responding to our prayers! (If I regard iniquity in my heart the Lord can not hear me.)

I choose as an act of my collective will, to surrender to You, all unforgiveness, anger, bitterness and resentment, all hatred and rage, all desire for revenge and retaliation, any thoughts of murder.  In particular, I choose to forgive and release (at this point include every one that the Lord brings to mind), and anyone else that I cannot recall, in Jesus Name

In accordance with Your Word, if I confess my sins, You are faithful and just to forgive me (unconditionally) and cleanse me from all unrighteousness. Accordingly I also choose as an act of my collective will, to forgive myself unconditionally and no longer beat up on myself. I renounce every vow I made that I can never forgive myself for being so stupid, so naïve, etc.

Where we have misplaced our confidence and trust in someone who has exploited and betrayed us, bitterness, resentment and bitter root judgements bind us to our betrayer.  This betrayal can occur in the world, but the reality is that it can all to often occur in the Church. Psalm 41:9, 55:12-14. It is imperative for us to choose as an act of our will to forgive our betrayer, giving the offence to God and to release ourselves, and so enable God to undertake justice on our behalf. God has given us free-will to choose our response, and He will not violate or override our will even if it might be in our best interests.

There are many instances when there is the requirement to specifically address the impact of generational legacies.  Examples are where there has been generational witchcraft, wicca, sorcery, divination, yoga, Buddhism, eastern mysticism, animism, ancestor worship, freemasonry and druidism; Mormonism, theosophy, and other cultic involvement; anti-Semitism, Nazi-ism, etc. Where there has been generational involvement in the groups identified, there are frequently legacies that are passed on to the children through subsequent generations.  These legacies can only be broken off through confession and repentance to God with an experienced spiritual confidant, where the legacee stands in the gap on behalf of their forebears on their mother's and father's generation’s.

There is plenty of evidence in the Old Testament regarding generational iniquity # and of the need to repent, and it has been assumed that the lack of detailed reference in the new testament, that the legacies have been dealt with on the cross!  While it  is true, we believe this is a dangerous assumption, and cannot be justified anywhere throughout the New Testament.  Even in the natural world just as physical and emotional legacies can be passed from generation to generation, the same thing is true regarding spiritual legacies.  For example generational rejection, fear and anger; short-sightedness, sickle-celled anaemia, Parkinson's disease, Huntington's chorea, Muscular Dystrophy, are just some examples of emotional, biological and physical legacies that can follow from generation to generation, the same is true spiritualy.

Heavenly Father in Jesus name, I stand in the gap on behalf of my mother and her generations and my father and his generations, and I repent and take accountability for the family's involvement in spiritism, medium-ship, participation in divination and the occult, particularly with palmistry, séances and Ouija-boards which has brought about a spiritual legacy on to myself and potentially onto my children and my children's children.  I renounce any family or familiar spirit, any spirit of witchcraft, sorcery, necromancy or divination; any psychic legacy that has passed onto me or has gained legal ground through any personal involvement, for which I repent and ask your forgiveness.  Ask you to cleanse me, and my future generations through Your Blood in Jesus Name, amen.

All unnatural and ungodly soul ties, trauma and sexual bonds and generational legacies need to be confessed with an experienced trusted counsellor/confidant and the sexual ties cut by the double-edged sword of the Spirit.  (Sometimes this involves closing any spiritual doors that have been opened, and evicting any demonic squatters as the need arises.)

Occult or Masonic involvement by previous generations in the family line, e.g. parents, grand‑parents, etc. bring upon the successive children, an unwanted spiritual inheritance for which they can be held accountable "even to the third and fourth generations." (Exodus 20:5, Deut.5:9) This requires acknowledging any violations, and asking the Heavenly Father's forgiveness and release through the Lord Jesus Christ from the effects of generational iniquity.

God's Word states, “If we claim to have fellowship with him yet walk in the darkness, we lie and do not live by the truth. But if we walk in the light, as he is in the light, we have fellowship with one another, and the blood of Jesus, his Son, purifies us from all sin. If we confess our sins, he is faithful and just and will forgive us our sins and purify us from all unrighteousness." 1John1:6ff

Neither psychology, psychiatry, nor medication can free people from the soul ties, trauma bonds and/or generational legacies. Only genuine repentance and prayer through experienced Christian ministries, drawing on the power of the resurrected Christ can set these captives free. “The reason the Son of God appeared was to destroy the devil's work." 1 John 3:8

If you need specific prayer, assistance, or further information, contact the author at the address at Contact Us.